My awareness of the importance of glutathione in health began with the brilliant commentary on oceanic disease (IMCJ 7.1) by associate editor Sid Baker, MD.1 Since then, as I have studied detoxification, mitochondrial function, and healthy aging, the critical role of adequate glutathione to health has become ever more apparent. I have now mentioned glutathione in several previous editorials: protection from oxidative stress (IMCJ 8.3),2 protection from mercury and other toxic metals (IMCJ 8.2, 9.3, 10.4),3-5 protection from alcohol (IMCJ 11.6),6 and protection from persistent organic pollutants (POPs) (IMCJ 12.2).7 This resulted in my creating a 60-slide lecture on glutathione, which I gave for the first time at the October 2013 Restorative Medicine Conference in San Diego, California. As several attendees told me it was one of the most important lectures they had ever heard, I decided to make glutathione the topic of this editorial.

Glutathione is a tripeptide (cysteine, glycine, and glutamic acid) found in surprisingly high levels—5 millimolar—concentrations in most cells. As can be seen in Figure 1, this is the same concentration in cells as glucose, potassium, and cholesterol! Considering the high level of metabolic activity required to produce glutathione, such a high level underlines its importance. 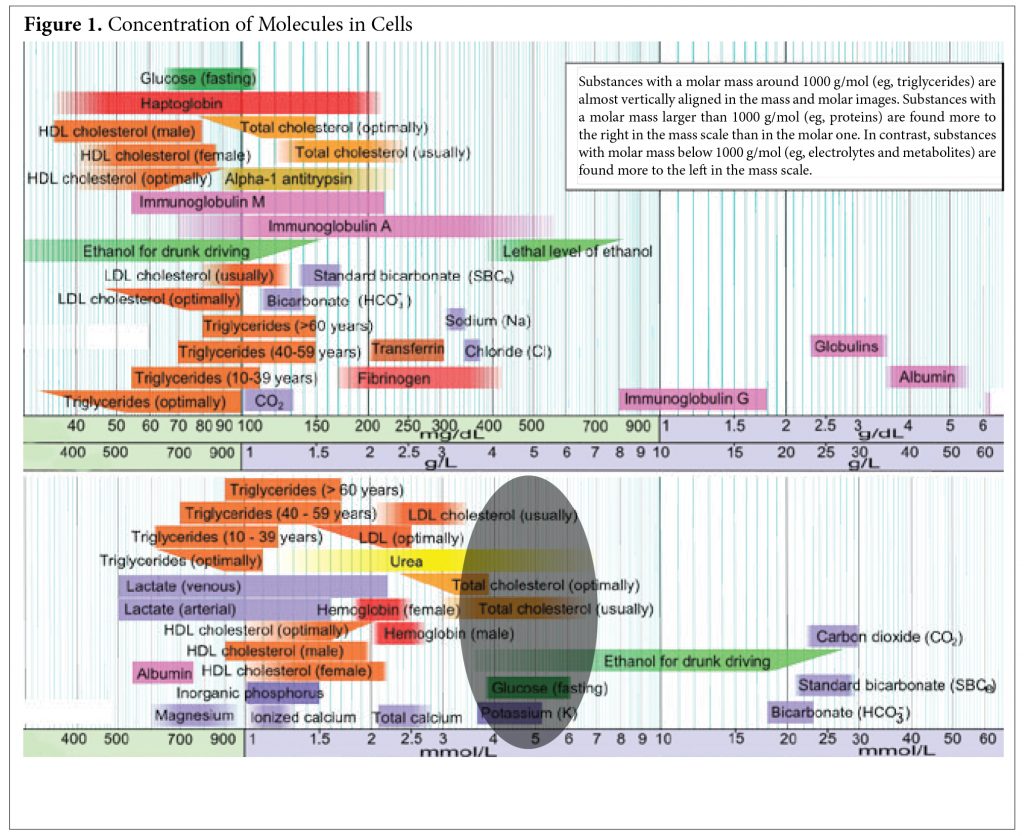 Glutathione exists in cells in 2 states: reduced (GSH) and oxidized (GSSG). As can be seen in Figure 2, oxidized glutathione is actually 2 reduced glutathiones bound together at the sulfur atoms. 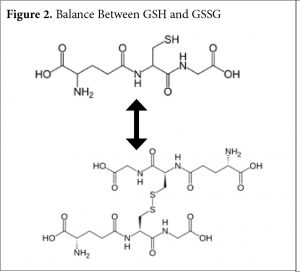 The ratio of GSH to GSSG determines cell redox status of cells. Healthy cells at rest have a GSH/GSSG ratio >100 while the ratio drops to 1 to 10 in cells exposed to oxidant stress. Glutathione is also recognized as a thiol buffer maintaining sulfhydryl groups of many proteins in their reduced form. Glutathione is produced exclusively in the cytosol and actively pumped into mitochondria. GSH is made available in cells in 3 ways:

Notice that all 3 require energy. The rate of synthesis, regeneration, and recycling is determined primarily by 3 factors8:

These 3 methods for producing glutathione can be seen in Figure 3.

Critical Role of Glutathione in Detoxification, Inflammation, and So Much More

It is hard to overstate the importance of glutathione, key roles of which are summarized in Table 1. It plays a crucial role in shielding cellular macromolecules from endogenous and exogenous reactive oxygen and nitrogen species. While it directly quenches some free radicals, of perhaps greater importance is that it deals directly with the causes of oxidative stress such as mercury and POPs. 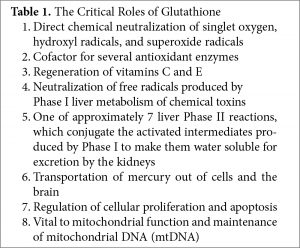 Glutathione is involved in the detoxification of both xenobiotic and endogenous compounds. It facilitates excretion from cells (Hg), facilitates excretion from body (POPs, Hg) and directly neutralizes (POPs, many oxidative chemicals). Glutathione facilitates the plasma membrane transport of toxins by at least 4 different mechanisms, the most important of which is formation of glutathione S-conjugates. Low levels of glutathione and/or transferase activity are also associated with chronic exposure to chemical toxins and alcohol, cadmium exposure, AIDS/HIV, macular degeneration, Parkinson’s disease, and other neurodegenerative disorders.

Another indication of the key roles of glutathione in health is that the accumulation of GSSG due to oxidative stress is directly toxic to cells, inducing apoptosis by activation of the SAPK/MAPK pathway.12 Glutathione depletion triggers apoptosis, although it is unclear whether it is mitochondrial or cytosol pools of GSH that are the determining factor.13
Perhaps the best indicator of the importance of glutathione is that its cellular and mitochondrial levels directly are highly associated with health and longevity.

As shown in Table 2, depletion of GSH has been implicated in many chronic degenerative diseases.

GSH depletion has been strongly associated with the diseases and loss of function with aging. A representative study of community-dwelling elderly found that higher glutathione levels were associated with higher levels of physical health, fewer illnesses, and higher levels of self-rated health.15 As might be expected, then, GSH status has been found to parallel telomerase activity, an important indicator of lifespan.16 This depletion of GSH also shows up as progressive loss of mitochondrial function due to accumulation of damage to mtDNA.17 The ability of animal species to protect their mtDNA is directly proportional to longevity.18

GGT as Measure of Glutathione Need

GGT (gamma-glutamyl transferase) is upregulated in proportion to the need for glutathione such as for the detoxification of POPs.19 It provides the rate-limiting cysteine through a catabolic “salvage pathway.” Increases in GGT correlate with many diseases: metabolic syndrome, both fatal and nonfatal coronary heart disease (CHD) events, atherosclerosis, fatty liver, diabetes, cancer, hypertension, and carotid intima-media thickness.20-22 Of particular note, these are elevations of GGT within the supposedly “normal” range. For example, men with a GGT of 40 to 50 have a 20-fold increased risk of diabetes.23 Research also shows a GGT 30 to 40—well within the normal range—is associated with a doubling of the risk of all-cause mortality.24 (For a more comprehensive discussion of the remarkable correlations between GGT and disease risks, please see my editorial in IMCJ 8.3).2

Considering how important glutathione is to health, many researchers have looked for ways to increase intracellular and intramitochondrial levels. The good news is that there are several effective strategies. The first, of course, is to decrease the need for glutathione, which means decreasing toxic load. The most obvious is limiting alcohol consumption (see my editorial in IMCJ 11.6).6,25 Less obvious is decreasing exposure to POPs, the primary source of which are conventionally grown foods. (See my editorial in
IMCJ 12.2.)7 Another strategy is to provide other antioxidants to decrease oxidative stress. A good example is α-lipoic acid, supplementation of which increases mitochondrial glutathione levels even though ALA is not used in the synthesis or recycling of glutathione.26

The obvious strategy is to directly administer glutathione. This can be done orally, topically, intravenously, intranasally, or in nebulized form.

Clearly, adequate availability of glutathione is critical for maintaining health, protecting the body from toxins, and promoting longevity. Fortunately, there is much we can do to optimize glutathione levels: primarily decrease toxin exposure (including alcohol) and promote production with regular consumption of whey or NAC. I think we are just scratching the surface of the clinical benefits that can be achieved through enhancing intracellular and intramitochondrial glutathione. (I hope you, my dear reader, enjoy these editorials as much as do in writing them.)